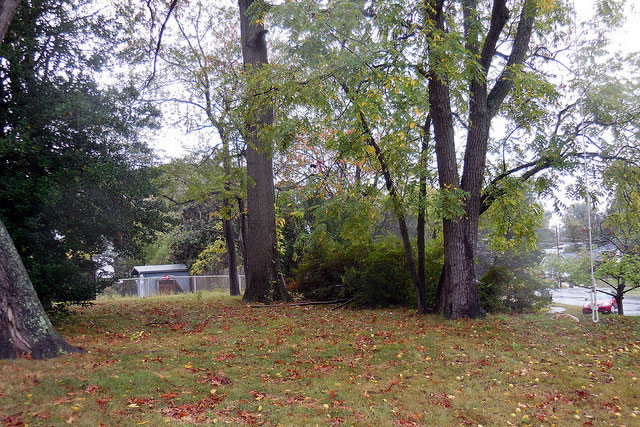 Believed to be Talbert Family Cemetery

At a request of a neighbor, a surveyor visited the cemetery. The neighbor knew that Talbert family members were associated with the cemetery, but none lived near by.  Neighbors had voluntarily been caring for the cemetery for over 40 years, but could no longer do so. Recently the grass had grown waist high on the ¼ acre plot and neighbors were looking for someone to step forward to maintain the cemetery.

There was very little evidence of the plot being a cemetery. The surveyor found a few large river rocks under bushes, which might have marked graves at one time. Also, there were suggestions of a few grave depressions.  After researching, the surveyor found that the Talbert family in 1860 owned approximately 100 acres in the area.  A Fairfax Herald newspaper obituary of 1929 reported James R.Talbert, age72, operated a farm and sold his produce in DC and Alexandria. At his death, he was described as a popular man, a good person and good friend. The obituary states that James R. Talbert was buried on the family farm in Franconia, which is part of Springfield, Virginia
When the land was sold to developers in 1962, the cemetery remained with three Talbert family members.  No records can be found that the three family members, who are now deceased, willed the cemetery to anyone. In the spring 2016, a scout will be leading an eagle scout project at the cemetery to help with the maintenance.