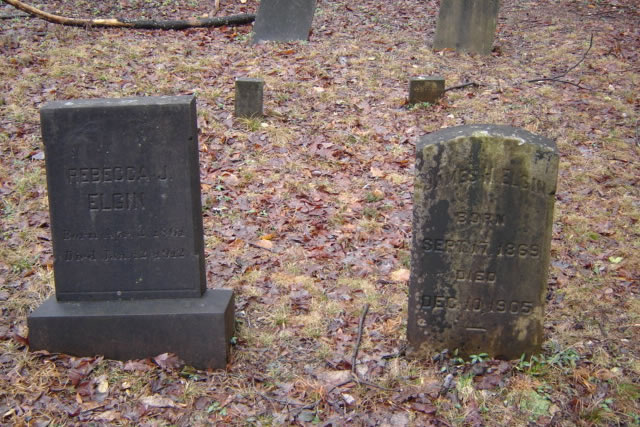 History of Family
In the spring of 2009, the surveyors visited this cemetery on Henderson Road, a busy road near Clifton. They noted the encroachment of suburban development upon the cemetery, which has eight markers and some unmarked graves. It is covered by leaves and limbs, but is easily distinguishable as a cemetery.

John W. Elgin, who farmed in the area, set aside a piece of land 40 by 100 feet for the cemetery. According to the 1860 agricultural census, he grew oats, Irish and sweet potatoes, and hay. He also produced 100 pounds of butter that year. By 1866, he and his wife had nine children. Their daughter Anna married John K. Brown and daughter Mary C. married J.W. Brown. It is not clear whether the two grooms were brothers. Eventually, grandson Joseph W. Brown inherited the Elgin family farm.

Before the Civil War, it was recorded that John W. Elgin was eligible to vote. However, there was no record of him voting for or against secession. After the war, he filed a claim for wartime damage to his property. His deposition recorded that he was lame and had not wanted to be in the army. In 1868, John W. Elgin was listed as a Trustee of the Clifton Baptist Church. At the age of 70 and a widower of one year, John W. Elgin married Bettie Davis ( 35) just two and half months before his death.

Note: Based on the 1860-1900 Federal Census John William Elgin and Mary Frances Elgin had 15 children. Fourteen of their children grew to adulthood.

Condition of cemetery and grave markers
There are 8 gravestones and 2 small markers in good condition.
Some could use cleaning. The grounds are also in good condition.
The description of the cemetery in the VA Room Fairfax County Cemetery Survey noted that there several unknown graves. These graves were not visible on the June survey.

Suggestions
There was periwinkle on a small plot of land behind the 10 headstones. This plot of land may contain the unmarked graves.
The plot of land is covered by sticks and leaves. It may be worthwhile to clear this area in an attempt to locate other burials.