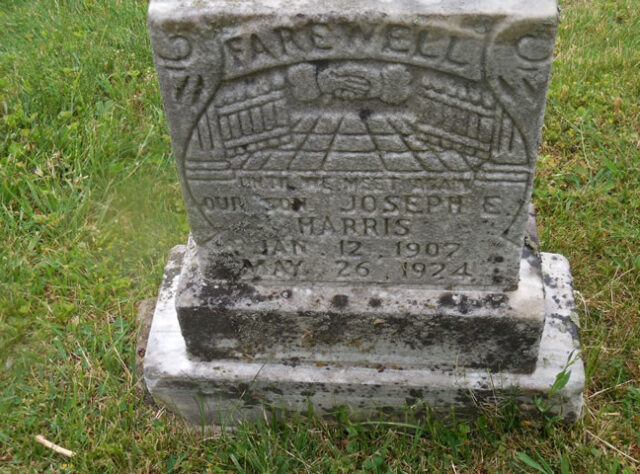 Lot description – The cemetery measures about 1.25 acres and is located on the back (east) side of Oak Grove Baptist Church. The cemetery has open access. It is surrounded by wooden property line fencing on the south and east sides, by the Washington and Old Dominion trail on the north side, and by the church and Dominion Lane on the west side.

History
This is a community cemetery.

Oak Grove was once an African American Community. Settled by former slaves and descendants of slaves, the Oak Grove Baptist Church was first organized in 1868. In addition to the church the surrounding community included a school, an Odd Fellows lodge, a store and several homes. According to a 2004 document entitled “Loudoun County African-American Historic Architectural Resources Survey,” the cemetery was established in 1902, however, the earliest known burial that the church has a record for dates to 1890. It is unknown if there are older burials due to records that were lost by fire.

The cemetery has been divided into the three sections: The Historic section (nearest to Dominion Lane), the West section (in the center), and the East section (on the east side).

A kiosk was erected on the property in 2012 as a result of a Boy Scout Eagle Project. The kiosk lists the names of those known to be buried in the cemetery. The cemetery records are incomplete as many were lost by fire in the 1893 to 1918 time period. Find-a-Grave first added a site for this cemetery in 2008 and it has been updated since 2012. As of 2021 the Find-a-Grave site shows 265 memorials. However, the kiosk lists over 370 names.

The church estimates that there could be as many as 610 total burials in the present-day cemetery.

Condition of cemetery and gravestone markers
This cemetery is generally well-kept and mowed regularly. There are many depressions in this cemetery that indicate unmarked graves.

Most of the vertical grave stones are erect with a few leaning and a couple fallen. About 17 horizontal/flat grave markers were previously overgrown with grass/sod but were recently uncovered/exposed. There were four large oak trees in the Historic section of the cemetery that were recently taken down; the stumps remain. Three displaced or “loose” vertical grave markers that once leaned upright against a trunk of one of these trees now lay on the ground near the stumps.

One vertical gravestone sits off to the south side of the cemetery in a wooded area that appears to be the original stone for Martha A. Shirley, an older head stone that was later replaced by a newer one that is now in the cemetery.

The cemetery is still used today with recent burials.

Suggestions Do a soft cleaning of the few older gravestones that are hard to read due to the accumulation of dirt and mold.

Turner Shirley (1837-1890). The oldest known grave in the cemetery based on surviving records. Once a slave in Madison County, Virginia, he later settled in the Broad Run area of eastern Loudoun County and became a farmer.

Archie Turner Shirley (1863-1965). Son of Turner Shirley. Graduated from Storer College. Became a teacher and taught in Herndon, Leesburg and Arlington. He was an original trustee and Grandmaster of the Autumnal Odd Fellows Lodge (located in Oak Grove across the street from Oak Grove Baptist Church). He was also an officer in the national organization of the Grand Order of Odd Fellows.

James Franklin Jackson (c. 1862 – 1940). One of the original trustees of Oak Grove’s Autumnal Odd Fellows Lodge and the merchant of the Oak Grove general store.

Ada Williams Lee (1891 – 1999). Lived to be 107/108 years old and is noted on the church website as the the longest standing member in the history of the Oak Grove Baptist Church.