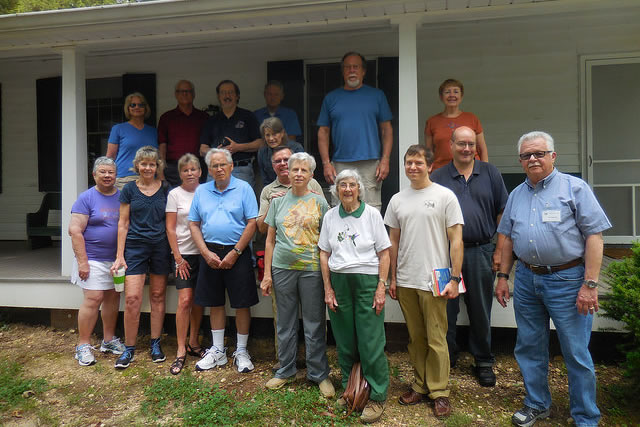 In June 2016 members of the Fairfax County Cemetery Preservation Association and the Burke Historical Society were led on a tour of the Woodlawn Quaker Meetinghouse and burial ground. In 1848, Quakers founded the meeting of Friends who still meet today.  Friends (Quakers), Chalkley and Joseph Gillingham purchased the 2,030-acre Woodlawn Tract in 1847. Other Friends purchased another 1,000 acres from the Mount Vernon estate and 1,000 acres from the Cedar Grove plantation near Accotink. Together they founded a community of farming, without slaves. Chalkley and Lucas Gillingham, and Jacob and Paul Hillman Troth formed the Troth-Gillingham Company, and divided the Woodlawn property and sold plots to other Friends from Pennsylvania and New Jersey.  A few years later the Woodlawn Quaker community, in addition to farming, was operating a saw mill, flour mill, a store and a blacksmith shop. The Troth and Gillingham families were well respected in the community. Chalkley Gillingham served on the Grand Jury in Norfolk that indicted Jefferson Davis as a traitor [Alexandria Gazette May 12, 1866]. When Gillingham died he was described as one of the best informed agriculture men in the area [Alexandria Gazette January 25, 1881].  P. Hillman Troth twice served as Commissioner of the Election at Accotink, in 1859 and 1861. He was also a charter member of the Woodlawn Horse Company.

The cemetery, which is located behind the meetinghouse, spans many generations of Friends, from the earliest leaders to 21st century members.