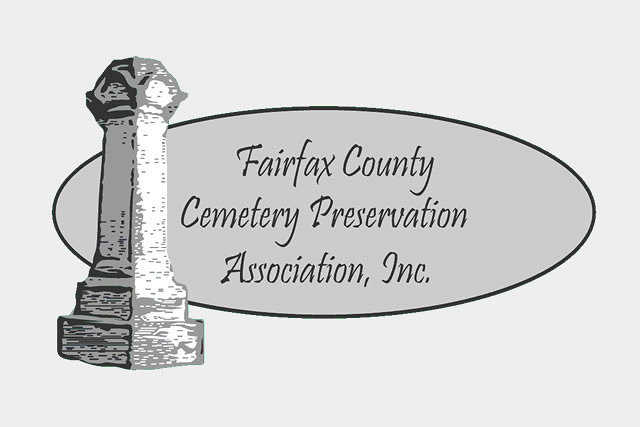 “A precious one from us has gone…” begins the inscription for Mary J. Marshall on the 14-foot monument in the family plot for Mary and her husband, John A. Marshall. John Marshall, whose family had connections in Burke for over 150 years, was the first postmaster of Burke in 1852. He also ran the Marshall General Store, worked as an agent at the Burke railroad store, and as a foreman for Silas Burke.

The Marshall monument is now defaced by spray-painted graffiti from vandalism in April 2008. By that time, the cemetery was littered with broken bottles, trash, and spray paint on nearby trees. This vandalism of the Marshall cemetery led to the creation of the Fairfax County Cemetery Preservation Association (FCCPA) which was charged with the mission to identify, document, preserve, and advocate protection for cemeteries in the county threatened by development, vandalism or neglect. As part of the mission, the FCCPA seeks to educate the community about the historical importance of cemeteries and how to preserve them.

During the past year, a few Fairfax Genealogical Society (FxGS) members became involved with the Fairfax County Cemetery Preservation Association (FCCPA) to learn more about its effort and connecting it with FxGS genealogical research and the FxGS Fairfax County, Virginia Gravestones books.

The Gravestone books are one of the sources that FCCPA uses in its efforts to locate and determine the condition of over 400 cemeteries in the county. FCCPA also makes use of the Fairfax Library Virginia Room online database and the Virginia Room cemetery vertical files. These files contain a range of information, including maps, surveys, photos, letters, and copies of records.

After a cemetery has been identified, volunteers conduct an on-site survey to determine the condition of the cemetery and compare the current gravestones with records from previous surveys and the Gravestone books. For the cemeteries that have been neglected or vandalized, the FCCPA enlists community help with the clean-up and preservation. Volunteers can also expand on the survey by researching and documenting genealogical information on the names in the cemetery.

Recently, a survey was conducted on the Grimesley family cemetery in Springfield. According to Volume 2 of the Gravestones book, surveyors in 1995 found that the site had been heavily vandalized and gravestones were broken and scattered. The family names recorded were Augustine Grimesley (1807-1866), his wife Mary E. (1811-1888), their son William (1840-1909), James Grimesley (d. 1894) and his wife Tabitha (d. 1895).

In the August 2009 survey, volunteers found the gravestones and various fieldstones; however it appeared that the community has been dumping brush and trees at the cemetery, so several portions weren’t accessible. There is no known listed owner. The cemetery is in desperate need of protection. There is no known listed owner, so the FCCPA is soliciting community help for the clean-up and maintenance of the cemetery.

Anyone researching this Coffer family will find a wealth of information in the Virginia Room cemetery vertical file. There was a family tree beginning with Francis Coffer and Mary Littlejohn who married about 1703 in Stafford County, Virginia and detailing descendants down through one line to a death in 1970. Also in the file were copies of approximately eight wills and other records relating to the Coffer family, along with newspaper and book extracts on the family.
These are just two examples of the cemeteries being surveyed and the family information that can be discovered through the cemetery research. The FCCPA currently has ten cemetery survey projects with photos and family information at https://honorfairfaxcemeteries.org.

As for the Marshall cemetery and the vandalism discovered in April 2008, that summer organized to clean out the trash and the brush and trees crowding the plot. The paint on the monument remains, pending the removal by a professional conservator.