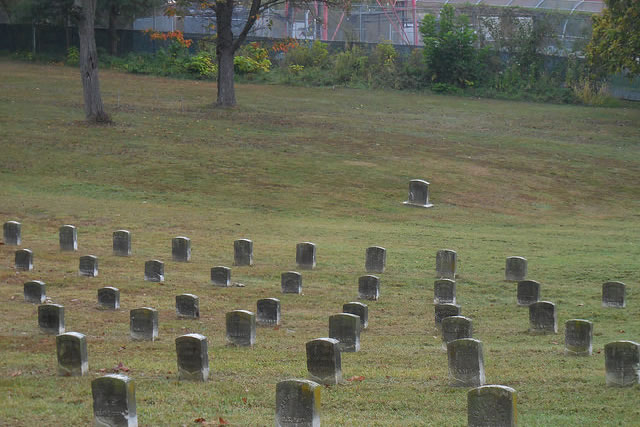 During the Civil War, the Union Army and Navy each operated a hospital at St. Elizabeths for soldiers, sailors, and marines. The Army facility was in the east wing of the historic building. Non-military mental health patients continued to be treated in the west wing. The Navy hospital was in a separate building today called the West Lodge. Military patients in their letters home during their recuperation at the hospital simply referred to it as St. Elizabeths, not its official title U.S. Lunatic Asylum.

Sometimes, President Lincoln, who visited the patients at St. Elizabeths, would spend the night in a room in the main building reserved for the President. The highest ranking patient was General Joe Hooker who had been wounded at the Battle of Antietam. Soldiers who were suffering from psychological trauma were treated there during and after the war. Also on the grounds of the hospital was a small shop which made prostheses for the many soldiers who were amputees.

Patients who died, black and white, were buried along side one another in two cemeteries on the hospital grounds. Many records of the the burials have been lost or destroyed; however, it is believed that six Confederate prisoners were buried there too. Nearly 1700 Civil War soldiers are buried at St. Elizabeths. Burials continued at St. Elizabeths through World War I. Today, St. Elizabeths hospital (and grounds) is a secure facility. Therefore, anyone who wants to visit these cemeteries must obtain permission.

Keith Young served as a project member of the Graves Registration Committee, Lincoln-Cushing Camp, Sons of Union Veterans of the Civil War, which conducted an extensive survey to identify Civil War soldiers buried at St. Elizabeths. Their 2005 project report is Burials of Some Civil War Soldiers at St. Elizabeths Hospital, Washington, D.C.