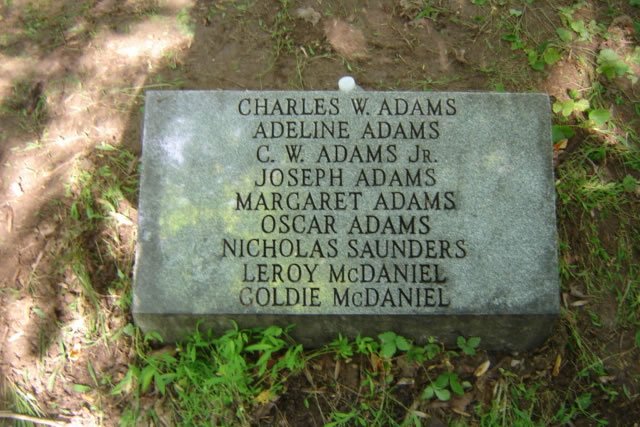 With the help of Scout Garrett Stewart who lives in the neighborhood of the cemetery, the surveyor was able to locate the cemetery. A wooden sign indicated that there was a cemetery, but the cemetery was so overgrown it was difficult to locate. As an Eagle Scout Project, Garrett led his BSA Troop #13 in a cleanup. A modern grave marker and several original field stones were located. The surveyor notes that continual maintenance is needed to prevent this cemetery from becoming permanently lost.

Charles Adams was a farmer in this area. He was also passionate about secession. At the secession vote in 1861, he threatened to shoot anyone who voted against secession. He later served in the Confederate Army with Ball’s Cavalry. In 1862, he was arrested as a spy. But the trial was postponed because he was hospitalized with the measles. There is no record that he was later brought to trial.

Charles and his wife Adeline had eight children: America, Oscar, Isabella, Thomas, Jane, Robert, Rosa and Lewis. Adeline’s father, Nicholas Sanders, was a veteran of the War of 1812 and lived next door to Charles Adams and family. Rosa Adams married Samuel B. McDaniel. A census search does not reveal the relationship of Leroy and Goldie McDaniel to the Adams or Sanders family; they are not children of Rosa and Samuel.