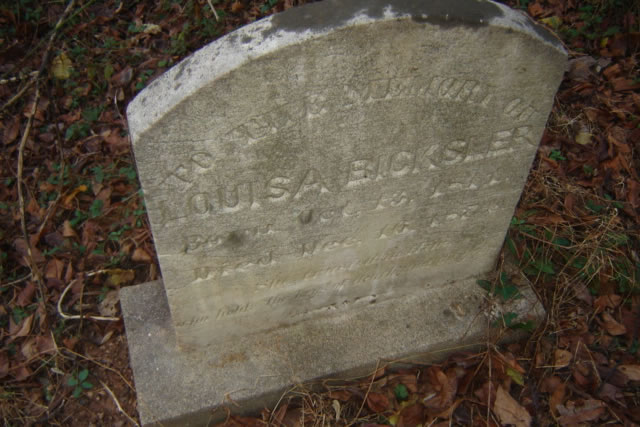 The cemetery is located on the back lot of a Great Falls home. According to the owner of the adjacent home, Bicksler relatives used to care for the cemetery, but no one has visited in years. A GMU student visited the cemetery in the summer of 2011 and found it overgrown and hardly recognizable. That same winter, a surveyor found that most of the foliage had died off and many grave markers were visible. Most of the 30+ graves are marked by field stones. Three inscribed markers remain, of which two are Bicklser family members. John Bradford is the third inscribed marker. His relationship to the family is not known.

The Bickslers were farmers, community officials and hotel owners. Henry Bicksler was the Dranseville postmaster in 1853 and a police captain in 1856. In the 1860 census for Dranesville township, Spring Vale area, three Bicksler are shown as neighbors to one another: Samuel, Joseph and Henry. When the Virginia secession vote occurred in May 1861, Joseph voted against secession, while Samuel and Henry supported it. When Henry B. Bicksler (Henry’s son) died in 1881, the Alexandria Gazette described him as the owner of the “Dranesville Hotel.”