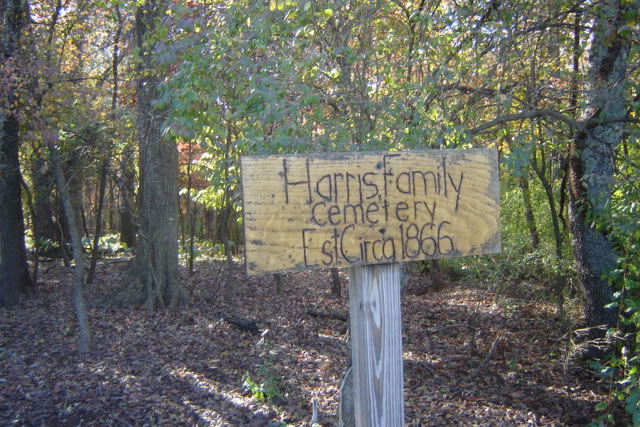 The Harris Family Cemetery is located on Bull Run Regional Park Property in Fairfax County. Without a sign at the entrance, visitors would have difficulty locating the cemetery.

All of the grave markers are field stone. The park has established that the cemetery began in 1866. According to Fairfax County Public Library cemetery files, there are at least twenty-two burials, including Obediah Harris and “Swampy Joe” Harris. There were many Harris families living and farming nearby according to the 1860 census. Some of the Harrises had been manumitted by Robert Carter. A Jesse Harris was first registered as a freed black in 1814. The 1870 census has two Obediah Harris, ages 55 and 25, possibly father and son. An Obediah Harris, who died in 1895, is buried in Cub Run Memorial Cemetery, which is located not far from Bull Run Park. The cemetery is covered with brush and ivy. The remains of a barbed wire fence lies along the edge of the cemetery.