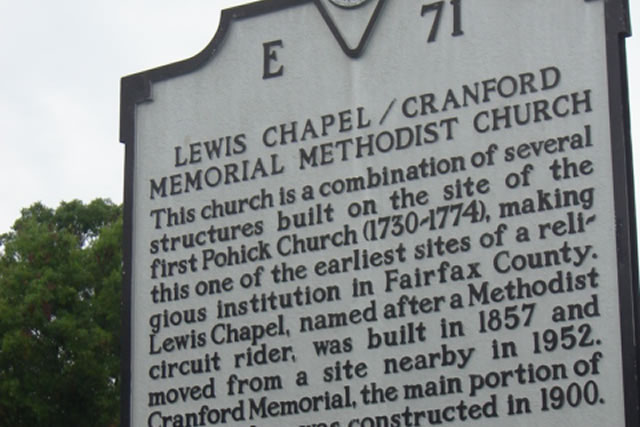 The site of the Cranford United Methodist Church in Lorton, Virginia is quite historic. On 16 June 1700, Indians attacked the nearby home of Thomas Barton, killing eight settlers. As a result of the raid, the colonial militia patrols were increased. Surveyors who visited the church and cemetery were impressed with the area’s three hundred years of history. This active cemetery is well maintained. The only suggestion that the surveyors could make would be to clean some of the older markers.

The existing church on the property is a combination of structures. The first building was the Pohick Church which was located here from 1730-1774. In 1767 the Vestry decided to build a larger and grander brick Pohick Church that was built and still exists today. Later the Lewis Chapel was established and in 1857 conducted services in a log cabin nearby. Cranford Memorial Church was built on this location in 1900. In 1953 the Lewis Chapel was moved about a block and joined to the Cranford Memorial Church. It is believed that a walkway of oversized brick that runs through the cemetery dates from the time of the first Pohick Church.