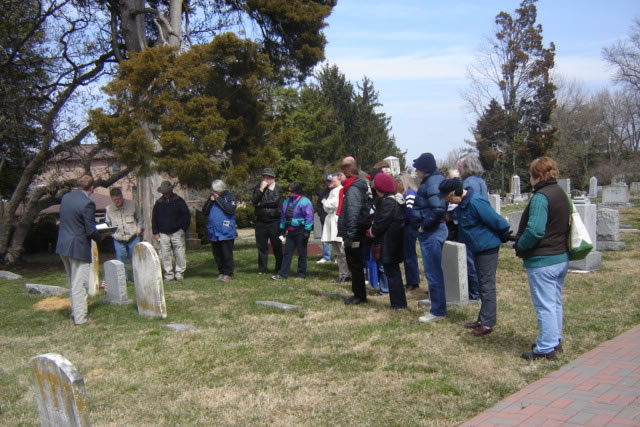 On March 23, 2013, FCCPA members led cemetery tours of Andrew Chapel Cemetery and Lewinsville Presbyterian. With approximately thirty in attendance, demonstrations and tours were presented at each cemetery. Participants learned the history of the cemetery and who was buried there. There were demonstrations of how to photograph and how to clean gravestones. Also, participants were introduced to zinc markers in each cemetery. The day received good reviews.

FCCPA members hosted a seminar at historic Blenheim in Fairfax City. Blenheim was used as a Union hospital during the Civil War. Many wounded soldiers etched graffiti on the walls of the home. Some of the wounded died there and were buried outside of the family cemetery, located on the property.

Keynote speaker Glenn Wallace described his work at Monocacy Cemetery in Maryland. Mr. Wallace started his work at the cemetery after fulfilling a request from Find A Grave. Since that first request, he has recorded thousands of burials in the cemetery and created a data base with the information. He also has collected over a thousand photos of those buried there.

The seminar continued with living history in Blenheim with Mr. and Mrs. Wilcoxon (historical re-enactors and FCCPA members Jon Vrana and Jenee Lindner) inviting the guests into their home. Docents from the historic park led a tour of the graffiti left by Union soldiers on the walls.