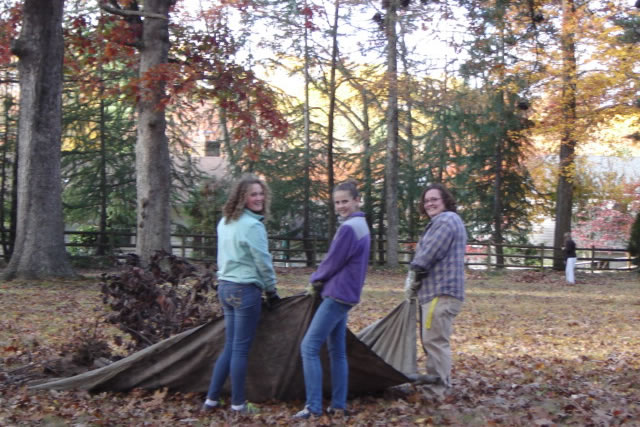 Girl Scout Teen Troop #4016, led by Abby Mundt, volunteered to clean the Wakefield Chapel Cemetery in November 2013. The scouts raked leaves, hauled limbs and cleaned grave markers. It appeared that some of the limbs and brush had been dumped by neighbors onto the cemetery property. Also, brush and weeds were trimmed away from the grave stones. While doing so, county archaeologist Aimee Wells located a previously unrecorded gravestone of Edw. Robinson.

Wakefield Chapel was built about 1887 on land donated by Oliver Besley. He also cut the lumber for the chapel at his sawmill. The first pastor Elhanan Wakefield, who was born in Ohio, led an exciting life. At the age of 15, he went west during the California Gold Rush. He enlisted in the Union Army during the Civil War. (See his Civil War Honor Roll profile.) After the war, he settled in Annandale, Virginia where he became a farmer and preacher.

Two of the earliest burials were Oliver and Mary Besley, who died five days apart in 1908. To date there are 31 graves with inscribed markers. There are also some graves marked with field stones. The cemetery is an active cemetery, with the most recent known burial as 2005. The burials tend to be clustered by families and there is a large apparent empty space in the middle of the cemetery. Today, the Fairfax County Park Authority maintains the chapel and the cemetery.