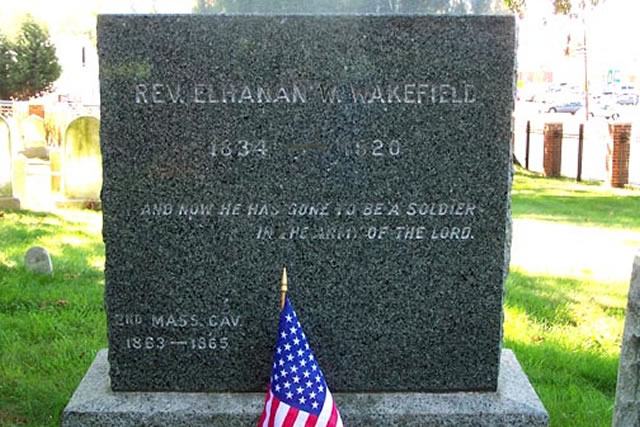 Elhanan Winchester Wakefield enlisted in the Union Army on February 9, 1863 in San Francisco, CA. He traveled to Boston, MA, with other members of Company F to join with other units of the Second Massachusetts Voluntary Cavalry. In the Battle of Gettysburg in July 1863, his primary duties included being in charge of the ammunition train transporting powder to the battlefield. In September 1863, he was transferred to Company K in Virginia. In summer 1864, he fought with General Sheridan (Shenandoah Valley Campaign) to gain control of the lower Shenandoah Valley. Later he was critically wounded at Fisher’s Hill on October 8, 1864. It was a gunshot wound in the left lung, ball lodging in left shoulder and never removed. He served in the Union Army until March 27, 1865.

Mr. Wakefield was the son of Peter Wakefield and the grandson of a Revolutionary War soldier. He left home at the age of 15 (1849) and headed out west to the California Gold Rush. It was said that he fought Indians in the Black Hills of North Dakota. Mr. Wakefield was also a relay for the Pony Express before the Civil War.

After the war, Mr. Wakefield settled in Annandale, Virginia, farming. He met and married 23 year old Mary Rebecca Tennison on September 5, 1865 and lived on the Tennison farm. They purchased the property two years later.