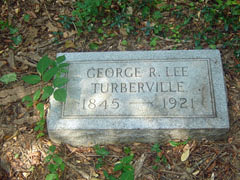 George Richard Lee Turberville (II) served with John S. Mosby’s Partisan Rangers as an artilleryman, operating the small howitzer that Mosby used so effectively in his Northern Virginia raids. With Mosby, Turberville participated in some of the most celebrated feats of the Confederacy in March 1863, including the capture of Union General Stoughton in Fairfax City, and the escape from the surprise attack at Miskel farm. At Miskel farm Mosby’s men, despite being attacked while sleeping by superior numbers, not only escaped, but succeeded in capturing more than half the Union force and delivering casualties for another 20%.

On May 30, 1863, the rangers set up an ambush along the tracks of the Orange & Alexandria Railroad near Catlett’s Station and destroyed a 14-car Union supply train. On June 12, 1863, George was captured at Middleburg by Union a cavalry patrol and sent to the Old Capitol Prison in Washington. He was soon paroled and rejoined Mosby’s command, only to be captured again near Aldie on September 16, 1863. He was again sent to the Old Capitol Prison, and later transferred to Point Lookout, MD, where he was held until he was released in a prisoner exchange on May 3, 1864. He was back with Mosby on June 10, 1864 and joined a raid on Alexandria and a failed attempt to capture Francis Pierpont, Governor of the Union-controlled areas of Virginia.

On October 29, 1864, Turberville was under the command of Captain Walter Frankland, who set up an ambush at Dulany’s farm southeast of Upperville in Fauquier County. The Union troopers took cover behind a stone wall and delivered a devastating attack. Turberville was one of the first men injured. He was seriously wounded in the thigh, left on the field, and taken prisoner for the third time. George recovered from his wound, but finished the war in captivity. He was paroled on May 21, 1865.

George was born to a prominent Virginia family at Leeton Grove, the family estate built in 1794 by his father. The house still stands, just off Walney Road in Chantilly, VA, surrounded by new residential developments. George was the great grandson of Richard Henry Lee, an American statesman from Virginia best known for the motion in the Second Continental Congress calling for the colonies’ independence from Great Britain. He was a signatory to the Articles of Confederation and to the United States Declaration of Independence. Through this line, George was also a distant cousin of General Robert E. Lee.

George was attending Waterford Military Academy, Prince William County, in 1861 when hostilities commenced in South Carolina. He enlisted in the South Carolina Infantry in 1861, but was prevented from serving by his mother. In 1863, he enlisted as a private in Company A of the 43rd Virginia Cavalry, Mosby’s Partisan Rangers.

After the war, George obtained a law degree from the University of Virginia. He married Adeline Stuart Thornton of Loudoun County on February 19, 1879, at St. John’s Episcopal Church, Centreville, VA, and by 1880, census records show him living in town employed as a lawyer rather than on the farm in Centreville. In 1880, he resided in the Village of Fairfax with his wife and one child. He later moved to Texas where he served as a county Prosecuting Attorney for some time. Census records show his two sons as born in Texas in the 1884-1886 timeframe. During the second term of President Cleveland, he was appointed to a position at the Government Printing Office (GPO) which he held for 27 years.

George’s wife Addie died in 1893, and their children were listed in the household of his sister, Hattie, in Centreville (assume she cared for them at Leeton following their mother’s death). Both the 1900 and 1910 census show George as a renter in Washington City, self-employed as a lawyer with a general practice, notwithstanding his position at the GPO. This photograph, taken in 1895, shows Turberville at the 50th Reunion of Mosby’s Partisan Rangers.

Larger image of marker
Researched and written by Sue Stewart