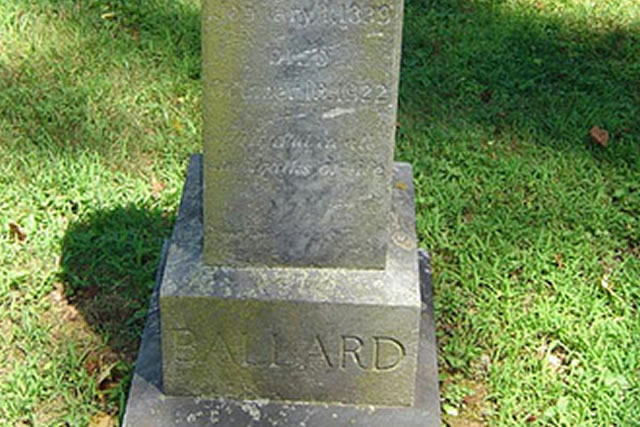 John Newton Ballard had the distinction of losing his right leg twice in combat, then finishing the war on the prosthetic leg of a deceased Union officer. Ballard was 22 years old in April 1861 when he enrolled as a Private in the 2nd South Carolina Infantry. He later returned to Virginia, and in May 1863, he joined service with Colonel John S. Mosby in company A of what was to become one of the most famous battalions of the war, the 43rd Virginia Calvary, or “Mosby’s Partisan Rangers”.

Shortly after the Rangers’ raid on Seneca Mills, MD on June 11, 1863, Ballard returned with Mosby to resume patrol on the east side of the Bull Run Mountains, near Ewell’s Chapel. It was there that Union Gen. George G. Meade ordered a trap set for Mosby and his rangers on the morning of June 22, 1863. The concealed U.S. infantry attacked as the Confederates approached the chapel. Mosby and his men quickly scattered and escaped with only three wounded, one of whom was Private John Ballard, who was shot in the leg.

Ballard’s leg was severely crushed by the ball, and further injured by the rough riding back to the mountains. He was taken to the home of Robert Whiteacre, near the top of the mountain, where his leg was amputated. Ballard was later admitted to the Richmond General Hospital # 1 to certify disability. He received a disability discharge on October 17, 1863, and retired to his home in Charlottesville, Virginia.

His retirement was short lived; by the following winter, he was back in Mosby’s command with an artificial leg. His artificial leg was crushed in a charge on a Federal camp near Halltown, VA led by Captain Adolpheus Edward Richards. After this event, he came in possession of the artificial leg of a U.S. Cavalry Colonel, Ulric Dahlgren, with which he was fitted. With Dahlgren’s leg, he was able to continue in active service until the end of the war. Ballard transferred to General John C. Breckenridge’s staff, where he was promoted to 1st Lieutenant and assigned to the 56th Virginia Infantry Regiment.

After the war, he moved to Fairfax County and made his home at Pender. He was employed as the Commissioner of Revenue, and he married Miss Lillie Thrift in 1874. Ballard attended the 50th Anniversary of Gettysburg in 1913. This photograph, taken in 1895, shows Ballard at the 50th Reunion of Mosby’s Partisan Rangers, with his crutch propped on his wooden leg.

Larger image of marker
Researched and written by Cameron Stewart