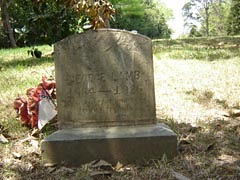 Black American free “Negro”, George Lamb served as a Body Servant to Capt. William H, Dulany of the Co.
D, 17th Virginia Infantry. Lamb was with Capt. Dulany, until Dulany was wounded and disabled at Blackburn’s Ford in July 1861. Afterwards, Lamb stayed with the Confederate Army and later received a Confederate pension. After the war, he was a blacksmith in Jason Cooper’s wagon shop in Fairfax. Lamb was well respected by all his neighbors, black and white, and affectionately called “Uncle George.” He is buried in the black cemetery, Jermantown. His epitaph reads “He was loyal and true to his friends. “