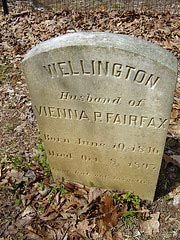 Wellington Fairfax was a descendant of Thomas Fairfax, 6th Lord Fairfax who owned over five million acres in the Virginia colony. Wellington’s parents were John H. and Mary. Barely 17, Wellington enlisted with the 15th Virginia Cavalry, which later joined the 43rd Battalion, a Virginia Cavalry, also known as Mosby’s Rangers. Wellington would have participated in many raids/attacks led by Mosby.

“My purpose was to weaken the armies invading Virginia, by harassing their rear… to destroy supply trains, to break up the means of conveying intelligence, and thus isolating an army from its base, as well as its different corps from each other, to confuse their plans by capturing their dispatches, are the objects of partisan war. It is just as legitimate to fight an enemy in the rear as in the front. The only difference is in the danger …” (Col. John S. Mosby, CSA)

After the war, Wellington Fairfax married Vienna (Vinna) Davis on December 19, 1867. In the 1880 census, Wellington and Vienna were farming and had five children, ages 5-17. Many of their neighbors shared the same last name, Fairfax. Wellington, Vienna, some of their children and relatives are buried in the Fairfax/ Buckley cemetery.