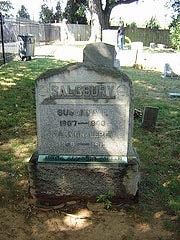 Harmon Salsbury (Salusbury) was born in New York in 1838. Before the Civil War, he lived on a farm with his parents and a brother. He enlisted as a private in August of 1862 with the 151st New York State Volunteers. Later he was promoted to Sergeant. In February 1864, he was appointed Capt. of Co. D, 26th US Colored Infantry at Riker’s Island, New York. Within the United States Colored Troops, most of the officers were white.
This regiment was ordered to South Carolina in April 1864. After the war ended in April 1865, Salsbury remained in South Carolina as part of the Union occupation forces until he was mustered out in August 1865.
When his army life ended, he relocated to Vienna, Virginia where he resided with his wife, Susannah Freeman.

In Vienna, Capt. Salsbury worked hard to help blacks obtain homes, land and jobs. According to his Vienna neighbors, Salsbury had developed a deep respect for the black man.

By 1870, Salsbury’s personal property and land were valued at over $16,500. He set aside a good portion of his land to sell to freedmen. He offered easy credit and long leases. The land, which was not farmed or sold, was established as an apple orchard. On October 23, 1891, the Fairfax Herald newspaper reported on Salsbury’s bumper crop of 2,000 barrels of apples. Also, the orchard provided work for the black men who earned between fifty to seventy-five cents a day, a fair wage for the time. Later Salsbury, donated some of his land for freed men to establish a cemetery, West End. Harmon is buried in Merrifield Cemetery with his wife, Susannah (1857-1903). Also on the marker is named Annis Salsbury Spayth (1882-1957).