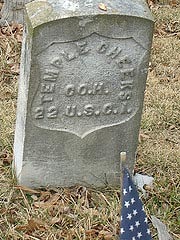 Black American Temple Cheeks was born in Fauquier County. It is unknown whether he had been a slave. At the age of 36 and as a freed man, he enlisted in the United States Colored Troops, Co H, 22nd US Colored Infantry. He was “drafted” at the 7th Sub district in DC on October 3, 1864.

“The United States War Department issued General Order Number 143 on May 22, 1863. This order established the Bureau of Colored Troops and it recruited many African American men into the Union Army. The regiments of the Union army that were composed of African American men were called the United States Colored Troops (USCT). Soon there were 200,000 black soldiers serving in the Union Army and Navy. These men were paid less than white soldiers, were given old and worn uniforms and poor equipment, and could not become officers. Despite the unfair treatment, black men volunteered to take part in combat. The USCT suffered from racial discrimination despite serving the Union forces. Seldom seeing active battle, many troops were assigned as laborers, construction workers, and guards on fortifications throughout the Union, including the Defenses of Washington.” (National Park Service)
Temple Cheeks served for one year as a private. After the war, he was living in Herndon, Virginia. In 1866, Temple Cheeks was one of the founders of Mt. Pleasant Baptist Church, which originally met in the old Floris School. In the 1880 census, Temple Cheeks, a laborer, was living in the Dranesville district with his wife Elisabeth and his daughter Margaret. His next door neighbor was Samuel Cheeks. Temple Cheeks is buried with the other founders of the church, within a small wrought iron fenced enclosure within the cemetery. His gravestone marker is of the military style markers of Arlington Cemetery.

Larger photo of marker
Researched and written by Mary Lipsey