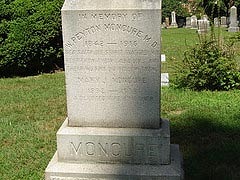 Walker Peyton Moncure was born in 1842 to Honorable Richard Cassius Lee Moncure and Mary Butler Washington Conway Moncure. His father was the Judge of Court of Appeals for Stafford County, Virginia. Walker attended Episcopal High, Alexandria and the University of Virginia.

At the age of 19, he enlisted as Lt. with the 30th Va Infantry, later reorganized as the 47th Virginia Infantry where he reached the grade of 2nd Lt. The 47th Virginia was formed in June 1861, with men recruited in Stafford County and other neighboring counties. The unit fought with the Army of Northern Virginia from Seven Pines to Gaines’ Mill, where Walker was wounded. He rejoined his men after the battle of Sharpsburg (Antietam). After the retreat from Gettysburg, Moncure was captured at Falling Waters and imprisoned at Johnson’s Island, New York, near Lake Erie for twenty months. After he was exchanged, he and his men were involved in the siege of Petersburg and were at Appomattox at the time of Lee’s surrender.

On April 8, 1869, he married Mary Joan Hughes of Baltimore. He attended medical school in Baltimore and Philadelphia, graduating in 1881. Dr. W. P. Moncure moved to Fairfax around 1885 and practiced Homeopathic medicine. He also served as: Commissioner of Accounts for Fairfax for many years; vestryman for Truro Parish; and chairman of the committee which established the Confederate monument and cemetery in Fairfax City. He is buried at this cemetery today.

Larger photo of marker
Researched and written by Mary Lipsey