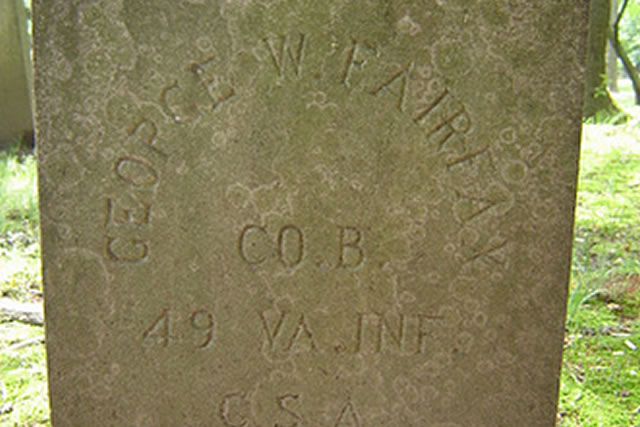 George and his brother, James, both voted for secession at Arundell’s Tavern. At the age of 28, George enlisted on August 12, 1861. During the war, he served with C.A. Nelson’s Quantico Guards of the 49th Infantry.

George was hospitalized in Richmond due to illness twice during 1861 and 1862. When the war ended, George was with Lee’s Army and was paroled at Appomattox Courthouse on April 10, 1865. Later, he and his wife settled on Wolf Run Shoals Road. In the 1880 census, George and Mary Fairfax, their three children, Peter Jett (George’s father-in-law), S. Peter Jett (George’s brother-in-law), and Thomas Fairfax (George’s brother) were living in the same house.

George is buried in the family cemetery with S. Peter Jett and John “Jeff” Woodyard, both also Privates in the Confederate army.