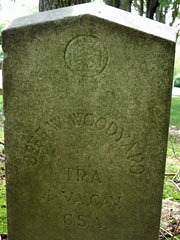 Jeff Woodyard voted for secession at Arundell’s Tavern. He enlisted in July 1861. He was badly wounded in May of 1862 at the Battle of Slatersville. He was discharged on June 27, 1863, possibly because of the severity of his wound. After the war, he owned and operated a blacksmith shop on today’s Wolf Run Shoals Road.

He is buried with two other Confederate soldiers, Private George W. Fairfax and Private S. Peter Jett, in the family cemetery nearby. Jeff Woodyard’s neighbor was James W. Fairfax, who was brother to George. W. Fairfax.