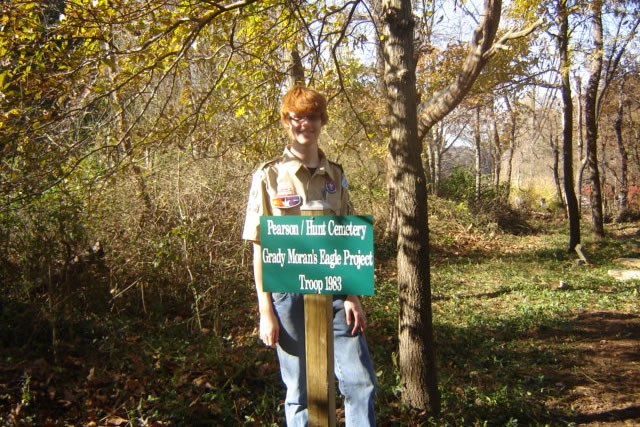 The cemetery, which is approximately one quarter acre in area, is located between Fox Mill Road and a residential home.

When it was surveyed, the cemetery was very overgrown. Without knowing there was a cemetery there, visitors would assume it was just woods and a thicket. Three markers were found in the foliage. Nellie J. Pearson’s marker, found leaning against a tree, was the only stone with an inscription. There appear to be more than twelve burials there.

Boy Scout Troop 1983 cleaned up the cemetery, led by Eagle Scout candidate Grady Moran. The clean-up uncovered several more field stones which once might have been head or foot stones.

The 1920 census records indicate that Nellie Pearson and her family lived with her father Lewis J. Hunt, who operated a farm on six acres. Lewis’ father spelled the last name “Huntt.” Nellie, the only heir of Lewis J. Hunt, inherited her father’s land upon his death in 1933. Nellie died in 1942 and her husband Maurice died in 1955.