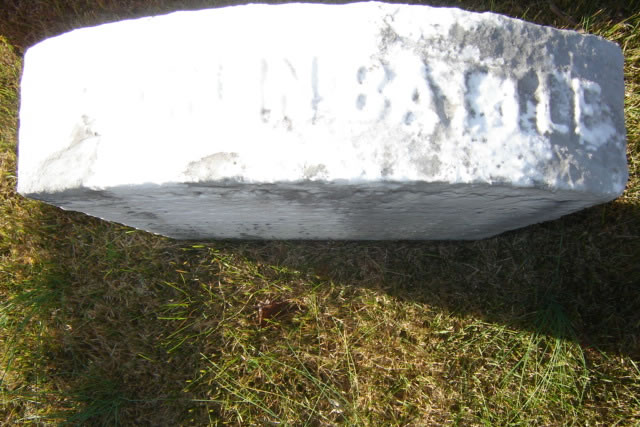 William C. Preston’s grave site is located at the 18th hole of a golf course in Centreville, Virginia. In November 2009 , the surveyors found the head and foot stone in good condition surrounded by a split rail fence. The inscription is difficult to read due to dirt on the stone.

From an earlier survey, the inscription reads: William C. Preston son of J. T. L. & S. L Preston Lexington, Virginia He was a private in the College Company of the 4th Virginia Reg’t Stonewall Brigade and fell at Manassas Aug. 28Th 1862 in the 19th year of his age. The Young Patriot lost his mortal life in defending his native state. The young Christian found his nobler life in Christ who died for him. The top of the head stone reads SLAIN IN BATTLE and the foot stone has his initials W.C.P.

Willy, as he was known to his family, joined the Stonewall Brigade. He was a favorite of Stonewall Jackson’s. Jackson’s first wife was the sister of Preston’s step mother, Margaret Junkin Preston. Jackson wrote of William,”I deeply sympathize with you all in the death of dear Willy. He was in my first Sabbath school class, where I became attached to him when he was a little boy.” ( quoted to James I. Robertson, Jr.) Margaret Preston describes in her letters how William’s father went to the battlefield, over a week after William died, to identify the remains and bring them home. Although father was able to identify his son’s shirt on the body wrapped in a blanket, he did not recognize his son. He marked the place of burial and returned home without the body. Upon returning home, his repeated words to his wife were “Slain in Battle.” Today, an exact duplicate of William C. Preston’s marker and foot stone are located the family plot in Lexington, Virginia, his birthplace. The Lexington monument has an additional inscription which reads: “His mortal remains buried on the battlefield and on his tombstone there the above is inscribed.”