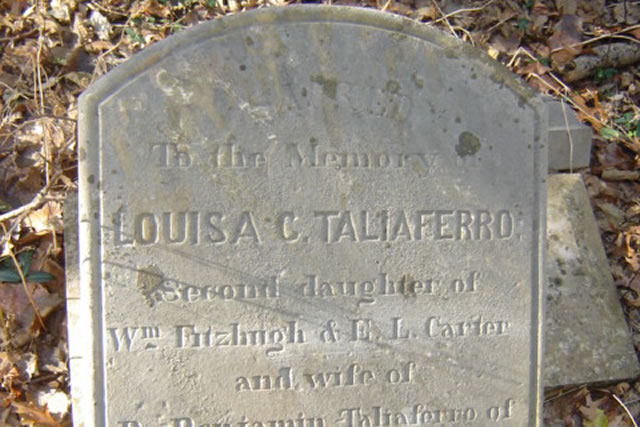 Taliaferro/Carter Cemetery is located on Sudley Road, in Centreville, east of the first tee of a golf course. The cemetery is associated with the family home, Sudley. The cemetery was surrounded by a stone wall and approximately 50 feet square. There are seven marble headstones and over 15 unmarked burials. In November 2009, the surveyors found the stone wall had disintegrated and the headstones, save an obelisk, were displaced and/or broken. Dead trees and brush covered parts of the cemetery. Also, man and nature had invaded as evidenced by animal holes and golf balls.

Taliaferros ( pronounced Toliver) are one of the earliest families is Virginia. The Taliaferros ( iron cutter in Italian) are originally from northern Italy. The Virginia immigrant migrated from London where he had served as a musician in Queen Elizabeth’s I court. Dr. Benjamin Taliaferro’s passing ( age 45) was noted in the Alexandria Gazette’: “Benjamin Taliaferro, well known in this vicinity, as a most estimable gentleman, died at his residence of pneumonia. So sudden was the attack that Dr. T. barely signed his will before life departed.” The United Farmer’s Club stated in the newspaper its regret at the passing of such an esteemed man.

Louisa C. Taliaferro, Dr. Taliaferro’s wife, is a descendant of another FFV ( First Family of Virginia), the Carters. Robert “King” Carter was a colonist in Virginia and became one of the wealthiest men in the colonies. He acquired his nickname from his wealth, political power, and business methods. He was President of the Governor’s Council of Virginia Colony and acting Governor of Virginia in 1716-1717. He succeeded in securing for his children and future generations 300,000 acres of land in Virginia. Louisa C. Taliferro was the great, great granddaughter of Robert “King” Carter.

For those interested, learn more about Robert “King” Carter.