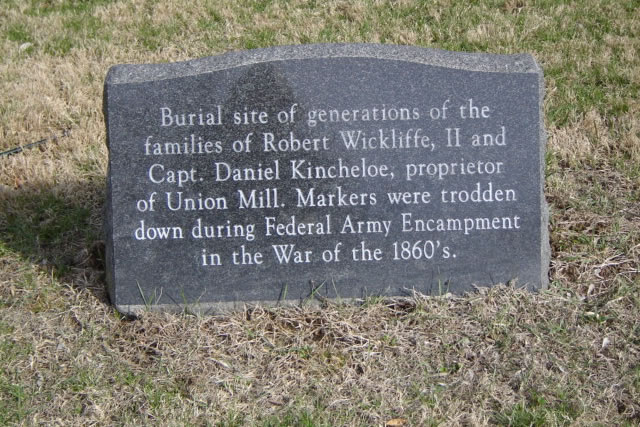 Today, the Wickliff / Kincheloe family cemetery is protected by its location on parkland of Hemlock Overlook Regional Park, but the damage to the cemetery occurred over one hundred years ago. In the spring of 2009, the surveyors found two joined markers and one monument. Several depressions were located but no other markers. During the Civil War, Union soldiers chose this site for encampment and in the process obliterated almost all evidence of the cemetery. The markers were trodden down and either carted off or eventually buried under the earth.

Two Wickliff brothers – Aaron and Moses, who fought together in the American Revolution – were known to be buried here. They were said to be second cousins of General George Washington and descendants of James U. Kincheloe, an early settler of Clifton. In 1928 the Fairfax Chapter of the D.A.R searched for the Wickliff graves. The Fairfax Herald of June 15, 1928 reported: “On the Doak Farm, near Bull Run, the old family cemetery was located and almost hidden by the growth of weeds and underbrush, the graves were found.” Later, the women of the DAR placed a marker.

Daniel Kincheloe, owner of Union Mill, is believed to have been buried in the cemetery.

Photos of the Wickliff / Kincheloe Cemetery