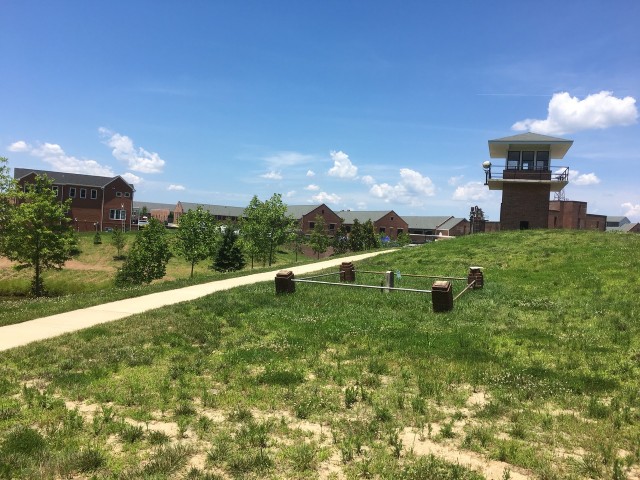 From James T Callender: Rev War Service: William Lindsay was commissioned in June 1776 as a Cornet with one of the Virginia light-horse troops which subsequently became the 1st Continental Light Dragoon Regiment. He was promoted to Lieutenant on 31 March 1777 and was slightly wounded in an engagement near Valley Forge on 20 Jan 1778. He was promoted to Captain on 7 April 1778 and assigned to Lee’s Corps of Partisan Light Dragoons. He resigned his commission in October 1778. In March 1781 he was appointed a Major in the 1st Virginia State Legion. Records show he was severely wounded at the battle of Guilford Court-House in May 1781 while serving under General Green, and returned to Laurel Hill to recuperate.

Located In Liberty (Van Metre Development)- off of Silverbrook Road in Lorton) on west-southwest side of Guard Tower Road, opposite the homes and just beyond the guard tower

Directions: From Lorton Road, go west on Silverbrook Road (just west of the Lorton Road/I-95 interchange), then turn left onto Power House Road (Liberty Entrance), proceed on Power House Road to 9164 Power House Road, stop here and park here along sidewalk. Immediately on the left is Guard Tower Road and a walkway leading past a Guard Tower, to the William Lindsay grave marker and on to the old road that leads to Snowden Ashford Road.

Comments: Grave marker sits on a small grass covered knoll just behind the guard tower, in a small plot enclosed by a metal railing anchored at each corner in four brick pillars. Two of the pillars are leaning, with one of the metal poles dislodged from one of the leaning pillars.

Just beyond the grave marker and its enclosure sits the Laurel Hill House, enclosed by a locked chain link fence (Fairfax County), largely overgrown with weeds and vegetation, and in very poor condition. Along the top of the hillside immediately east of the house are the remains of a brick retaining wall that sat atop a section of a formal terraced garden that cascaded down the hillside. The asphalt roadway that was the Laurel Hill Entrance Drive (c.1919) is on the west side of the house and at one time connected to Lorton Road. The entrance drive is currently blocked with a locked, chain link gate (Fairfax County).