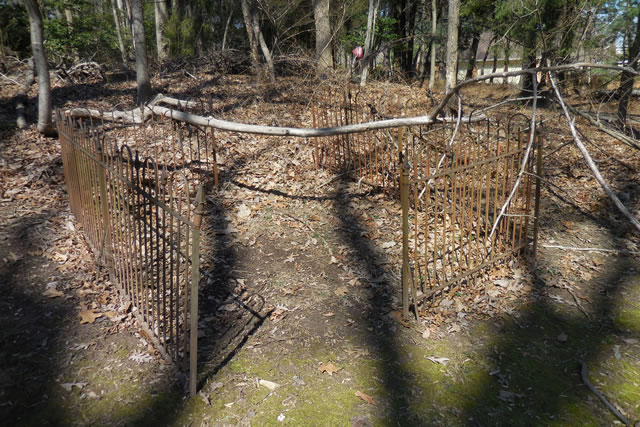 Records state that the Bethel Regular Baptist Church was founded in 1866 on the same property of the Union Methodist Church, which began burials in 1817. In the early 1960s, the Baptist church decided to eliminate the cemetery in order to construct a parsonage for the pastor. Family members were asked to move the remains of their loved ones to other cemeteries.  In 1962, an undertaker petitioned the Fairfax County Circuit Court for permission to move a few remaining family graves and Civil War soldiers graves to the rear of the parsonage property.

Today,  at the back of the parsonage property,  there a few family graves ( Iden, Wynne, Peacock, Trammell, Walker.) Earlier cemetery surveys record additional family gravestones which were not located in 2015. Three of the families, the Idens, Wynnes and Peacocks, are related by marriage. There is a marker for William Walker and his young son. Margaret Trammell, who was living with her brother W.T. Trammell when she died, is buried by herself.  There is also evidence of graves marked by field stones.  Questions remain as to why these family graves were not removed to other cemeteries.

Records state that Civil War soldiers were buried within the iron fence.   Accounts differ as to how many men are buried there, 40 or 92. In 1936 the Works Progress Administration conducted cemetery surveys in the county.  During an interview, Mrs. Iden (no first name provided) stated that during the Civil War, the church had been used as a hospital and that the Union used her adjacent farm as a “campground.”  This would explain the burials of so many soldiers.  After the Civil War, Edmund Whitman of United States Quartermaster Corps searched for the burials of Union soldiers and ordered them removed and reburied at Arlington Cemetery.  How were these men missed?  The question may never be answered.