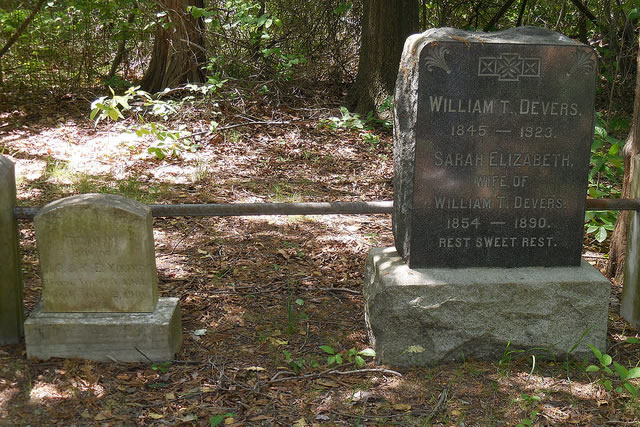 The cemetery is located in an office complex in Springfield, Virginia near the intersection of MetroPark Drive and Beulah Street. A gravel path behind a brick wall leads up a hill to the cemetery. In the spring of 2015, surveyors found the cemetery covered with leaves, fallen branches, invasive plants and young trees. There are 10 grave stones.  In 1999 a county archeologist did a field study of the cemetery and stated that there might be additional unmarked graves.  The earliest death that the surveyors noted was in 1864.

However, the surveyors felt that many of the grave stones were less than 100 years old.

The Devers (Deavers) family and Tyler family were related.  James Tyler ( 25) married Caroline (18) Devers in 1860. Both families owned small farms in the Springfield area.  They had livestock and  grew corn, rye, oats and potatoes. The Civil War showed divided allegiances between the families.  James Tyler voted for secession.  However, William T. Devers was arrested on a charge of helping Confederate raiders.  While imprisoned, he denied those charges, saying he had been forced to help the Confederates. After swearing allegiance to the Union, he returned home. After the Civil War,  the families appeared to have no lasting differences, as they were buried aside one another in the cemetery.